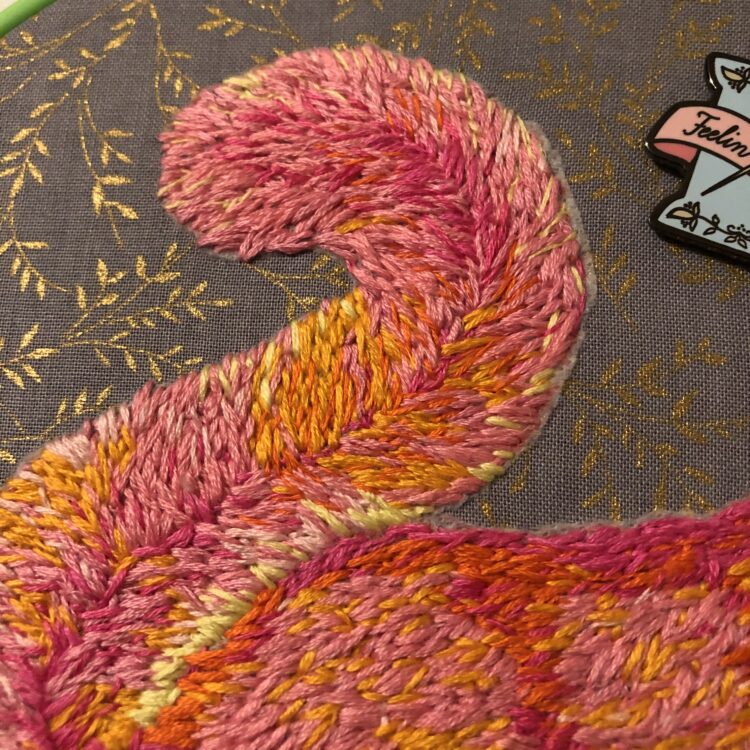 A few months ago, I made a passing joke to a coworker about a craft project I was going to do. A couple of months went by and I remembered it again for some reason and I thought it would actually be a really great project. Before I could jump into that project, I needed to learn the skills to make it happen. And so began my thread painting journey!

I started with a small Pegasus at the end of June.

It’s not the greatest work, but it’s my first work, you know? Like the inspirational pinterest quote says, “Don’t compare your Chapter 1 to their Chapter 20.”

I saw where I needed to improve, and I started a new project the next weekend. One I still can’t figure out why I picked, seeing as how I have an extreme aversion to…

Again, I see where I can improve. (not embroidering things that creep me out so hard might be something to work on!) But I am still in the early chapters. I did this one in a few hours in one day.

I took my time with my third project…

This time I traced my picture onto some wash away stabilizer and tacked it down to my fabric. I worked on it over a couple of weeks, paying attention to blending colors. I added some grass to hide some of the awkwardness of his feet. I probably could have kept going, I could still be adding layers right now, but I know I need to move on to the next project.

I started a mythical creature that I don’t know the name of. It’s like a goat with wings? Like a Goat Pegasus with a monkey’s tail. I’ll post that up when I finish it.

After that, I might do one or two more odds and ends before I start on the big project that came from a joke that I am sure my coworker doesn’t remember. I have told a couple of people what I am aiming to do, but don’t want to spoil it by revealing what it is here. But it’s something that everyone will go “Of course she did that!” about.

It’s one of those things that kind of reminds me of my 3rd grade Halloween costume. I didn’t tell ANYONE at school what I was going to go as (quite a feat for a small child, I thought.) and when I showed up at school, everyone knew it was me. Like, “Of course Brandi dressed up as Santa Claus for Halloween.”

jumping into the deep end